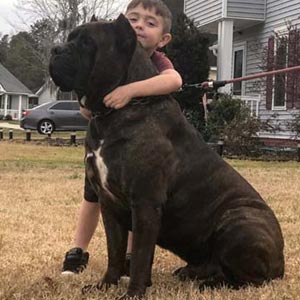 What is known about Bandog history

The Bandog or Bandogge was a name first given to dogs of the mid 1200-1300's. Originally not a breed but a term used to describe dogs that were bound during the day often by chain and then set free at night as guard dogs to deter intruders.

Originally this dog was made up of various varieties each with a focus on its guardian nature. The natural inclination due to purpose was to select dogs of various mollosser types thus their more eventual standardized look resembling many of the bully breeds today.

In the mid-1960's Dr. John Swinford set about to create as he put it "the ultimate guard do". The primary foundation dogs for his program were the American Pit Bull Terrier and various mastiff lines with the largest focus on that of the English Mastiff.

For those educated on dog breeds they will see that this dog is in fact the precursor to the modern day American Bulldog and American Bully.

While many such as Dave Wilson, Tony Moore and Richard Barajah are often given the credit for the role of developing the American Bully the reality is, that the practice was going on far before they were even born.

While these individuals are controversial figures who many blame for the downfall of the American Pit Bull Terrier through deceitful paperhanging practices with the United Kennel Club they were skilled in their marketing practice resulting in widespread acceptance of the American Bully and have caused significant change in the Registration industry itself.

Currently most individuals who were at one time breeding under the Bandog / Bandogge moniker who remain breeding today have switched over to the American Bully as their goby name in preference due to its more widespread acceptance and softer imagery.

What does it cost to register my Bandog with the American Bully Association?

What does it cost to register a Bandog litter?

Where can I find a single Bandog registration form for my dog?

Can I register an entire Bandog Family (Mom, Dad and Litter) simultaneously?

How long does the Bandog registration process take?

Where can I acquire a pedigree template for submitting my Bandog known genealogy / pedigree information?