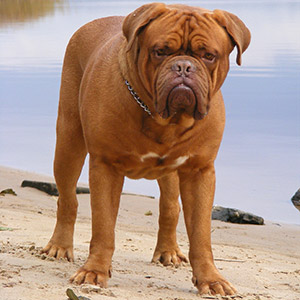 What is known about Dogue de Bordeaux history

The Dogue de Bordeaux or sometimes known as the French Mastiff is one of the oldest known French dog breeds documented as far back the early 14th century. Its name was derived from the Bordeaux region of France after an 1863 Paris show where it was the winner and thus named after the capital of its region. Historically this breed was a heavy working breed and guarding breed known for its guard work of many European castles.

Historically the breed is believed to have existed even before the Bullmastiff and Bulldog and is believed by some to have influenced their development. Some even believe the breed to be related to the Greco Roman molossoids of war as there is documented evidence of a very similar breed in Rome at the time of Julius Caesar's rule. Others also postulate that it may be related to the Neapolitan Mastiff. The truth is forever lost to history but it is possible that there is a little bit of truth in all of the above theories.

In the distant past various varieties exhibited different colors and markings but overtime the expected norm has become the red color.

While the breed is known to have existed in America as early as the 1890's their lines were not kept pure. Others later were imported but the breed never was established officially. By 1982 there were no recorded Dogue de Bordeaux in America and only 600 documented left in the world, most of which still resided in France, Holland and East Berlin.

In 1989 the breed gained stardom in the classic Hollywood picture Turner and Hooch. Since then it has had additional appearances in media and is enjoying significantly greater popularity and desire among the public.

One of the biggest negatives to the breed is its expected short life span. On average the breed lives only 6 years. Also due to their large size and lack of significant genetic diversity hip dysplasia is common.

Because the breed shares much of the same history as other molosser breeds it is not a surprise that it is believed to have been used by some in the now developing American Bully breed.

What are the Dogue de Bordeaux breed standards

Color:
Various shades of red with black, red or brown mask. Small white marks are allowed on the chest and toes.

What does it cost to register my Dogue de Bordeaux with the American Bully Association?

What does it cost to register a Dogue de Bordeaux litter?

Where can I find a single Dogue de Bordeaux registration form for my dog?

How long does the Dogue de Bordeaux registration process take?

Where can I acquire a pedigree template for submitting my Dogue de Bordeaux known genealogy / pedigree information?