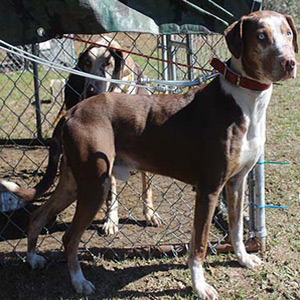 What is known about Catahoula Cur / Catahoula Leopard Dog history

While the exact history of the breed's development is unclear as is the case with many breeds it is theorized that the breed was developed when native Americans bred their own dogs with various Molosser breeds brought over in the 16th century by Spanish explorer and conquistador Hernando de Soto.

Another theory holds that the breed was more formally developed three centuries later when French explorers bred their dogs with local canid. During this period the French documented strange looking dogs with glass eyes used by the Indians to hunt in the swamp. Given the timeline it is even possible if both theories hold some weight.

It is believed that the name may have been derived from the Choctaw Indians.

This breed has been primarily bred for its work and not for appearance so uniformity varies throughout the breed. One primary characteristic that helps make this breed unique is webbing that is located between its toes. While the dog is known for it's hunting very rarely does it actually catch and hold. The nature and size of the breed has that more often it will trap its prey and hold them in place without touching them by using direct eye contact, lateral shifting and its unique bark much in the way herding breeds control their flock.

At one time the breed was exported to Australia and New Zealand to help with control of the local wild pig population.

Another unique trait of the breed is they often maintain the Merle genetic trait. This same trait was historically expressed in the American Pit Bull Terrier and as such coupled with both breeds hunting nature many thought it would be good to breed the two breeds together. This breeding later resulted in what is now known as the Catahoula Bulldog and is the subject of much confusion about the purity of Merle Pit Bulls by those who are ignorant of the historical nature of Merle in the history to the Pit Bull breed. In addition to ignorance this myth of impurity has been perpetuated by many biased individuals and due to inside politics resulting in changed standards in 2005 in the Registration industry by the UKC and ADBA in the Pit Bull community. These misleading stories have hurt the Merle Pit Bull and have sought to rob the breed of an important part of its history.

Deafness has been reported in the Catahoula as well as other breeds that contain the Merle gene. In most cases this can be attributed to specimens that are primarily white as this is an indication of lack of melanin that also contributes to the auditory development of a dog. Other significant factors that lead to deafness are lack of genetic diversity perpetuated by irresponsible inbreeding. It is important to understand the effects genetics have when breeding especially when it comes to Merle genetics. While the genetic trait has been reported to have been found this has later proven to be false and as of yet there still remains no test that can accurately identify it. Because of the known links to deafness that high levels of white and inbreeding has however those who do choose to breed Merle should take precaution and breed in such a way the limits inbreeding effect and also breed to darker specimens to insure higher levels of melanin. When properly bred this and other breeds that are affected by Merle genetics have not proven to have any higher risk of deafness of or negative health impacts than any other breed.

It is also often theorized that breeding Merle to Merle can cause increase risk of negative health impact. Specimens that have been bred this way and do show negative health effects have not been properly researched enough to determine if it has been the Merle to Merle breeding or if other factors such as high degrees of inbreeding or high levels of white are more directly attributed to the negative health impacts. In our own research when inbreeding has been limited and primary whites excluded in breeding then there has been no increase in the level of deafness or other negative health effects often theorized about Merle breedings. Some believe it is unethical to breed in such a manner, but others claim that they have had great success in such breeding when they did control other factors such as insuring proper genetic diversity and only breeding to darker colors. While no conclusive well reviewed evidence has been developed against such breedings anyone considering such should take great care and first take their time to understand the Merle trait in greater detail and then if they do decide to move forward with such breeding should seek to eliminate or reduce other risk factors as much as possible. In the end this is a breeder beware scenario as a bad litter can lead to the need to cull pups in order for them not to add to an unwanted pet population.

What are the Catahoula Cur / Catahoula Leopard Dog breed standards

Eyes:
ALL colors acceptable and may show the glass eye or cracked marble eye also related to Merle

Tail:
When full will often exhibit the appearance of a question mark. Bobtail is also natural to some in the breed and may vary from just missing one vertebrae all the way to everything beyond the first vertebrae missing.

Color:
ALL colors acceptable and often influenced by Merle genetics.

Feet:
The Catahoula is known for its webbed feet helping in its hunting tasks in the swamp and marshlands as well as adding to its swimming ability.

What does it cost to register my Catahoula Cur / Catahoula Leopard Dog with the American Bully Association?

What does it cost to register a Catahoula Cur / Catahoula Leopard Dog litter?

Where can I find a single Catahoula Cur / Catahoula Leopard Dog registration form for my dog?

Where can I acquire a pedigree template for submitting my Catahoula Cur / Catahoula Leopard Dog known genealogy / pedigree information?