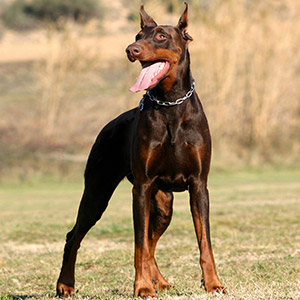 What is known about Doberman Pinscher history

The Doberman Pinscher or more commonly called just Doberman was developed by Karl Friedrich Louis Dobermann, a tax collector from Germany around 1890. While most breeds grew out of a specific working task this breed is unique in that it was specifically developed as a protection dog since Karl was a tax collector, which was a very dangerous profession at the time. In addition to being a tax collector he also ran the dog pound in Apolda Germany. While the purpose of his breeding was for protection his goals were to develop the perfect combination of strength, speed, endurance, loyalty, intelligence and ferocity.

Later Otto Goeller and Philip Greunig continued to develop the breed to a standard we are more familiar with today.

While not being a more pure molosser the influence of molosser lines is undeniable. The exact combinations and breeds in its makeup are unknown but are believed to be influences in part by the German Pinscher, the Beauceron, the Thuringian Sylvan Dog, the Greyhound, the Great Dane, the Weimaraner, the German Shorthaired Pointer, the Manchester Terrier, the Old German Shepherd Dog, old shorthaired shepherd and Black and Tan Terrier. Another breed that is often not mentioned but should be considered given its look and locality of primary development is the Rottweiler. The only documented cross however is the Greyhound and Manchester Terrier. While some of these breeds seem to be obvious others would seem to be a reach given their specific genetic traits. The breed was not formally named until after Karl Dobermann's death in 1894 in honor of him.

During WWII the dog was used among other breeds as official war dogs of the US. After the war the dog lost its appeal with the public and was almost lost to history. Werner Jung is given the most credit for saving the breed and even risk his life smuggling dogs into West Germany in order to salvage the breed. Since then it has made a recovery to one of the most desired breeds, no doubt stimulated by such shows as Magnum PI, but has suffered many ups and downs in its long recovery.

While the standard for the breed is to be cropped and docked many choose to forgo this process either because they enjoy the uncut look or in some cases due to laws in some areas that now prohibit such processes.

While the most common look for the breed is black and tan other examples of blue and tan and even a pure white with blue eyes commonly known as tyrosinase-positive albinoids, which mean lacking melanin in oculocutaneous structures. This condition is caused by a partial deletion in gene SLC45A2.

What are the Doberman Pinscher breed standards

Standards vary depending on where in the world the breed exists, averages are as follows though:

Eyes:
Typically dark brown except in the white variety where then they may also be blue due to the presence of albinoids and may be lighter in lighter colored specimens

Tail:
Docked or undocked, if un-docked long and slender typically forming a "C" to "O" shape.

Color:
black, red, blue, fawn, white
In cases of black, red and blue tan points are usually also present but can on occasion be muted. Also typically exhibit rusting of the muzzle, chest, throat and legs.

What does it cost to register my Doberman Pinscher with the American Bully Association?

What does it cost to register a Doberman Pinscher litter?

Where can I find a single Doberman Pinscher registration form for my dog?

Can I register an entire Doberman Pinscher Family (Mom, Dad and Litter) simultaneously?

How long does the Doberman Pinscher registration process take?

Where can I acquire a pedigree template for submitting my Doberman Pinscher known genealogy / pedigree information?