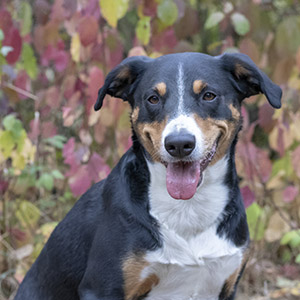 What is known about Greater Swiss Mountain Dog history

The Greater Swiss Mountain Dog was developed in the Swiss Alps as a product of Swiss dogs being bred to Mastiffs brought in by foreign settlers. The breed has had its ups and downs from being the most popular breed in Switzerland to nearly going extinct as many breeds have or did during the rise of the industrial revolution, when many labor jobs were faded out due to machinery or the popular movements of people moving into cities to escape farm life in search for alternative employment opportunities.

Theories on the development of the breed credit the Romans with their Molossers during their period of world domination 2,000 years ago. Also it is speculated that it could have been the product of the Phoenicians with their influence on the development of the Spanish Mastiff and Dogue de Bourdeaux during their period of exploration and conquests.

During the breeds development it was bred for primarily farm work such as herding, guarding and due to its size the ability to pull carts, which led to the nickname "the poor mans horse".

Not until 1968 was it imported to the US by J. Frederick and Patricia Hoffman where today they are now ranked in the top 100 most popular of breeds.

Urinary incontinence can be an issue while the dog is sleeping. This condition is most often found in spayed females. Too often people are goaded into spay and neuter of their pets by the animal activist community under the claims of over-population. Too often is this encouraged without properly educating owners on many of the potential negative side effects of such procedures such as changes in temperament, increase risk of certain cancers and other health related issues. While there is evidence to support an overpopulation of mix-bred dogs, over-population of purebred breeds is a myth. If litters are undesired alternatives to sterilization exist such as strict inside keeping and only allowing the dog out on a leash and proper confinement behind fences.

Due to its large size it is often afflicted by the same issues as other large breeds face such as hip dysplasia, heart issues, breathing issues, gastric issues and climate related issues such as easily overheating.

What are the Greater Swiss Mountain Dog breed standards

Muzzle:
Square and even without pronounced over or under-bite

Color:
Most specimens come in black and tan tricolor with a white blaze, paws and chest and tip of tail. Other colors however can be present such as blue and tan, white and tan tri and white and tan bi.

What does it cost to register my Greater Swiss Mountain Dog with the American Bully Association?

What does it cost to register a Greater Swiss Mountain Dog litter?

Where can I find a single Greater Swiss Mountain Dog registration form for my dog?

Where can I acquire a pedigree template for submitting my Greater Swiss Mountain Dog known genealogy / pedigree information?