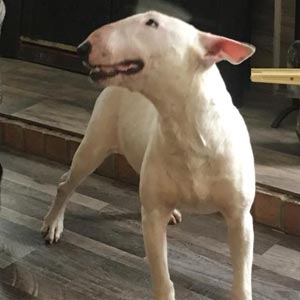 What is known about Bull Terrier history

This breed comes in both a standard and miniature variety. This breed is known for its stubborn personality and thus is not typically encouraged for new dog owners.

Due to the primary white coloration of many specimens this breed may also be more prone to deafness and some types of cancer and allergies.

Later in its history additional breeds of the Dalmatian, Greyhound, Spanish Pointer, Foxhound and Whippet were reportedly used to increase elegance and agility; and Borzoi and Collie to reduce the stop. The first modern Bull Terrier is now recognized as "Lord Gladiator", from 1917, being the first dog with no stop at all.

What are the Bull Terrier breed standards

Color:
White is often preferred in the show ring but other combination of colors, are often sought by everyday pet owners such as brindle.

What does it cost to register my Bull Terrier with the American Bully Association?

What does it cost to register a Bull Terrier litter?

Where can I find a single Bull Terrier registration form for my dog?

Can I register an entire Bull Terrier Family (Mom, Dad and Litter) simultaneously?

How long does the Bull Terrier registration process take?

Where can I acquire a pedigree template for submitting my Bull Terrier known genealogy / pedigree information?