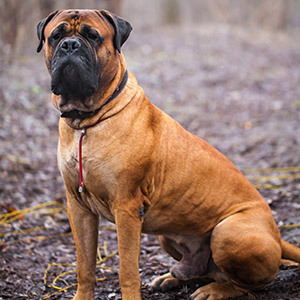 What is known about English Mastiff history

The English Mastiff or more regularly referred to as simply Mastiff is a giant bully breed believed to be descended from the ancient Alunt. The English mastiff and its predecessors have been critical to the development of the majority of known molosser breeds.

While the Irish Wolfhound and Great Dane are taller the English Mastiff is the largest dog in the world based on mass with specimens weighing up to 250lbs and with the largest ever recorded coming in at a whopping 343lbs.

The color range of this breed are relatively minute coming in various shades of fawn with or without brindle.

Examples similar to the English Mastiff breeds date back as far as 1600BC in figurines.

The Book Of Saint Albans credited to Prioress Juliana Berners written in 1465 contains the first list of dog breed names in which the term Mastiff is used. Historically there is evidence that the first Mastiffs may have entered America on the Mayflower but officially was not recorded entering until the late 1800's.

With various ups and downs in the breed's history it was nearly lost to extinction by 1910. Since then however the breed has once again gained popularity and is now one of the more popular breeds in America.

What are the English Mastiff breed standards

Color:
Various shades of fawn with or without brindle

What does it cost to register my English Mastiff with the American Bully Association?

What does it cost to register a English Mastiff litter?

Where can I find a single English Mastiff registration form for my dog?

Can I register an entire English Mastiff Family (Mom, Dad and Litter) simultaneously?

How long does the English Mastiff registration process take?

Where can I acquire a pedigree template for submitting my English Mastiff known genealogy / pedigree information?