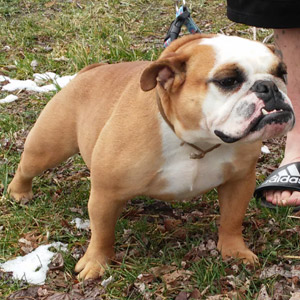 What is known about English Bulldog history

The Bulldog or English Bulldog as it is more often called is one of the most popular breeds in existence. This breed is a foundation stock of many of the bulldog breeds today. Short and thick with a characteristic short muzzle often accompanied by a fold above the nose referred to as the rope.

Natural to the breed is a short bobbed tail, which may be confused with being docked but is not.

The English Bulldog today has been down bred as older examples in history tended to be larger resembling the often confused Olde English Buldogge. This down breeding has been a product primarily of the show ring and desires of the current pet owning community.

Originally referred to as Bondogge and Bolddogge the Bulldog was first mentioned in literature around 1500. The first reference of the name change was in 1631-32 by Preswick Eaton in a contract of purchase in reference to the sport legal at the time of bull baiting.

While the English Bulldog matures slowly it also has a relatively short life where it begins to shows signs of aging as early as 5-6 years and average lifespan up to 10yrs.

Due to the low level of genetic diversity and physical structure this breed is reported to have the highest level of hip dysplaisa of any breed.

Also due to structure most litters are required to be delivered by caesarean section.

Due to the excessive folds that are often present regular cleaning should be done to help prevent infection.

At the beginning of the 20th century the English Bulldog was the first dog ever to achieve the selling price of $5,000 by political figure Richard Croker, which would be equivalent to around $57,000 today.

What are the English Bulldog breed standards

Nose:
Black or red with red being a disqualifier in some registries

Color:
Red, brindles, white, fawn and all level of piebald

Gait:
Characteristically this breed has a unique gait appearing as a rolling sideways motion.

What does it cost to register my English Bulldog with the American Bully Association?

What does it cost to register a English Bulldog litter?

Where can I find a single English Bulldog registration form for my dog?

Can I register an entire English Bulldog Family (Mom, Dad and Litter) simultaneously?

How long does the English Bulldog registration process take?

Where can I acquire a pedigree template for submitting my English Bulldog known genealogy / pedigree information?