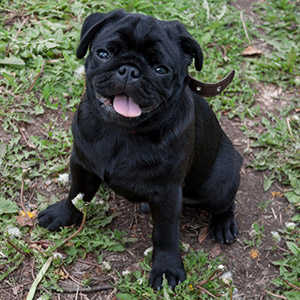 What is known about Pug / Dutch Mastiff history

The Pug is a breed most people are familiar with. The corkscrew tail, buggy eyes and body that resembles an artesian bread loaf.

The Pug is an ancient breed brought over to Europe from China in the 1500's. During its early time in China it was popular in the Song Dynasty. Made popular in the Netherlands this breed has contributed to the English Bulldog, Pekingese and Cavalier King Charles Spaniel.

Pugs were popular at European courts, reportedly a Pug named Pompey become the official dog of the House of Orange in 1572 after a pug saved the life of the Prince of Orange by alerting him to the approach of assassins.

Adored by many especially the nobility of the 16th century the Pug found itself being included in a painting by Goya in Spain and in Italy they rode up front on private carriages dressed in Jackets and pantaloons to match the coachman.

Traditionally the breed comes in various shades of fawn and black.

The original breed was longer and leaner but preferences over time modified the breed to be more short and squatty.

Many in the breed exhibit a moderate underbite.

The Pug is well known for its personality earning the Latin saying "multum in parvo" or "much in little".

As with many purebred dogs over the years there has been a high level of inbreeding. Because of the low level of genetic diversity this makes purebred dogs with smaller gene pools more susceptible to genetic related illnesses such as hip dysplasia and weakened immune systems that lead to or exacerbate issues such as demodectic mange. Additional genetic issues such as necrotizing meningoencephalitis, which is an inflammation of brain and meninges is also more common in purebred small dog breeds.

What are the Pug / Dutch Mastiff breed standards

Color:
All shades of fawn and black with fawns typically exhibiting a black mask

What does it cost to register my Pug / Dutch Mastiff with the American Bully Association?

What does it cost to register a Pug / Dutch Mastiff litter?

Where can I find a single Pug / Dutch Mastiff registration form for my dog?

How long does the Pug / Dutch Mastiff registration process take?

Where can I acquire a pedigree template for submitting my Pug / Dutch Mastiff known genealogy / pedigree information?