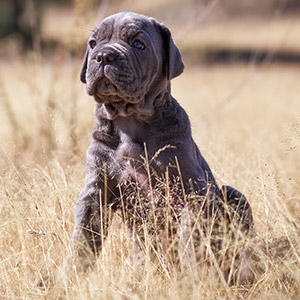 What is known about Mastino Napoletano / Neapolitan Mastiff history

While Mastino Napoletano is its given name it is more so well known by the name Neapolitan Mastiff. This huge breed is quite unique in its appearance and is believed to be related to other breeds such as the Dosa Inu, Tosa Inu, and Dogue de Bordeaux.

This breed has been used as a guard dog and given its notable size one would believe this alone is enough for use as a deterrent. The breed does not bark much and is well known for its ability to sneak up on intruders, which may be hard to believe given its hulking size.

While popular for centuries throughout Europe the breed was almost lost to extinction after WWII. It was at this time that Piero Scanziani an Italian painter took interest in the breed and set up a formal breeding program and officially named the breed Neapolitan Mastiff. In his breeding program he included English Mastiffs to help solidify the stock.

A Neapolitan Mastiff is credited with having the largest known litter of any breed. The litter numbered 24 but 4 did not make it.

Due to unique characteristics of the Neapolitan Mastiff a vet specialist is often needed in their care, especially when there is need for anesthesia. This is a situation that one needs to take great care with especially when it comes to animal groups that propose sterilization of pets who often do not educate pet owners on the subsequent risks involved.

What are the Mastino Napoletano / Neapolitan Mastiff breed standards

All shades of blue, black, mahogany and tawny with reverse brindling in these shades acceptable

What does it cost to register my Mastino Napoletano / Neapolitan Mastiff with the American Bully Association?

What does it cost to register a Mastino Napoletano / Neapolitan Mastiff litter?

Where can I find a single Mastino Napoletano / Neapolitan Mastiff registration form for my dog?

Where can I acquire a pedigree template for submitting my Mastino Napoletano / Neapolitan Mastiff known genealogy / pedigree information?