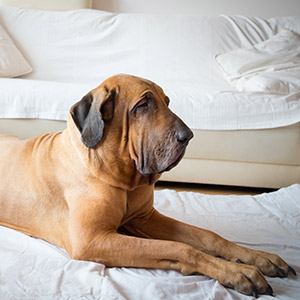 What is known about Fila Brasileiro / Brazilian Mastiff history

The Fila Brasileiro or commonly known as the Brazilian Mastiff is a large mastiff breed developed in Brazil and is made up of English mastiff, Bloodhound, Bulldog and Rafeiros do Alentejo.

Due to its size and potential for aggression the breed has been banned in several countries such as United Kingdom, Israel, Denmark Norway, Malta and Cyprus as well as considered a dangerous dog in New Zealand and Trinidad and Tobago requiring their sterilization and disallowing their import.

The gait of the breed is quite unique in that both legs on each side move together giving it a rolling motion some have said resembles the walk of a camel.

Characteristic to the breed is its ability to chase and hold, which is even exhibited in the young offspring.

Dr. Paulo Santos Cruz is often referred to as the father of the breed and was instrumental to the development of the first standard.

Due to its dedication to its owner and obedience there is a saying in Bazil that is "As faithful as a Fila". Due to its large size it is often afflicted by the same issues that other large breeds face such s hip dysplasia, heart issues, breathing issues, gastric issues and climate related issues such as easily overheating.

What are the Fila Brasileiro / Brazilian Mastiff breed standards

Color:
Various shades of fawn with or without brindle

What does it cost to register my Fila Brasileiro / Brazilian Mastiff with the American Bully Association?

What does it cost to register a Fila Brasileiro / Brazilian Mastiff litter?

Where can I find a single Fila Brasileiro / Brazilian Mastiff registration form for my dog?

Where can I acquire a pedigree template for submitting my Fila Brasileiro / Brazilian Mastiff known genealogy / pedigree information?