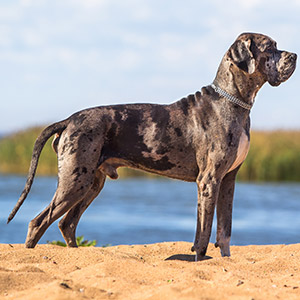 What is known about Great Dane history

The Great Dane or sometimes referred to as the German Mastiff or Deutch Dogge in Germany is one of the tallest breeds in the world matched only by the Irish Wolfhound, which it is believed to have also played a role in developing. Typically from year to year the Great Dane wins the title as tallest with the current tallest one by the name of Zeus that reached the height of 44 inches at the shoulders.

Dogs resembling the great Dane have been historically represented in Egyptian monuments that date back to 3,000 BC and in frescos of ancient Greece from the 14th-13th century BC. The University of Copenhagen Zoological Museum manages no less than seven skeletons of very large hunting dogs, dating from the 5th Century BC through 1000 AD.

The breed in its more present day form was given the name Great Dane in 1755 in Buffon's Histoire naturelle, générale et particulière.

It is common in the US for owners to crop the ears but is less common in European countries due to laws that prohibit the practices of cropping ears and docking tails.

It should be noted that very little is actually known about the Merle trait. The majority of what is written is based on pure speculation without any valid scientific evidence to back up such theories. Many show the trait noted with the "Mm" or similar derivative but no evidence of such a gene actually exists and claims that it is a dominant trait have no scientific validity. At one point it was believed that the Merle gene was determine but since has be proven false and the test subsequently pulled from the market. Most of what is reported on Merle, often times by self-proclaimed experts, is as trustworthy as a wicker basket holding water. While health issues are often reported in a negative way against the Merle trait no studies exist that have addressed issues of inbreeding or high levels of white genetics, which have on the other hand been concretely proven to also be related to the same issues often blamed on the Merle trait. While the Merle trait should not be taken lightly many breeders have bred Merle specimens (even some Merle to Merle) without any increased evidence of health issues simply by not including high levels of white, reducing inbreeding coefficients as much as possible and not breeding Merle to Merle.

Fawn, brindle, blue, black, mantle (primary black with white areas on the muzzle, chest, collar, legs and optional blaze. Also referred to as Bostonian in reference to its similarity to the Boston Terrier), and harlequin that is related to and in some cases includes the Merle trait.

What are the Great Dane breed standards

Ears:
Cropped or un-cropped, if cropped should be high cropped with erect stance

Eyes:
ALL colors and shades

Weight:
Must be no less than 28lbs to be considered in conformation

What does it cost to register my Great Dane with the American Bully Association?

What does it cost to register a Great Dane litter?

Where can I find a single Great Dane registration form for my dog?

Can I register an entire Great Dane Family (Mom, Dad and Litter) simultaneously?

How long does the Great Dane registration process take?

Where can I acquire a pedigree template for submitting my Great Dane known genealogy / pedigree information?