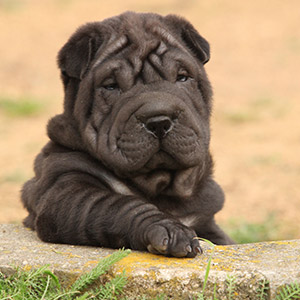 What is known about Shar-Pei history

While considered a molossoid breed the exact makeup of the Shar-Pei is unknown. Derived from China the Shar-Pei breed is actually believed by science to be an ancient breed. The Ancient breeds are considered by science to be breeds most closely genetically related to the wolf. The study that derived at this conclusion however is questioned due to the level of actual representatives studied and breeding practices that have affected both domesticated dogs as well as wild wolf populations.

Two unique characteristics the Shar-Pei has is the blue-black tongue, which is believed due to Chow Chow infusion into the breed and their loose skin, which allows them to literally twist in their skin to fend off an attack.

During the Communist Revolution the Shar-Pei population dropped to dangerous levels putting the breed at risk for extinction. During this time a businessman from Hong Kong named Matgo Law made an appeal to Americans and subsequently smuggled in 200 Shar-Pei to re-institute the breed. Because most Shar-Pei are now the descendants of these 200 a marked difference can be noted between the new American Shar-Pei and the ones that still originate from China. As with many show breeds those in the show ring have sought to exaggerate some desired characteristics such as down-breeding of size and greater wrinkling. Those that remain true in China are often referred to as bone-mouth Shar-Pei whereas the westernized version is referred to as meat-mouth Shar-Pei.

Many fall in love with this breed when they see the pups due to its heavy wrinkling. As the dog matures however it literally grows into its skin and the wrinkles become less pronounced. Others love the hippopotamus shape of the head.

The Shar-Pei name itself means sandy coat, which is more a reference to its harsh feel than to its coloration.

What are the Shar-Pei breed standards

What does it cost to register my Shar-Pei with the American Bully Association?

What does it cost to register a Shar-Pei litter?

Where can I find a single Shar-Pei registration form for my dog?

Can I register an entire Shar-Pei Family (Mom, Dad and Litter) simultaneously?

How long does the Shar-Pei registration process take?

Where can I acquire a pedigree template for submitting my Shar-Pei known genealogy / pedigree information?