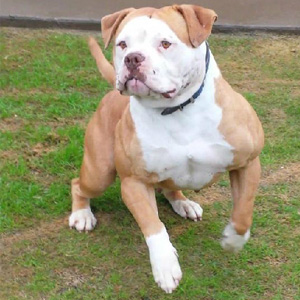 What is known about Olde English Bulldogge history?

The Olde English Bulldogge was developed in the early 1970s by David Leavitt of Coatesville, PA, using a system developed by Ohio State University for breeding cattle. Leavitt had the goal of recreating the Old English Bulldog of history from the Regency Period without it being confused with the modern-day English Bulldog, which has been down-bred from its predecessors. Leavitt's breeding stock included English Bulldog, American Pit Bull Terrier, Bull Mastiff, and American Bulldog.

In the early 1980s, the breed was further advanced through the efforts of Ben and Karen Campetti from Sandisfield, MA, where they began showing their Olde English and gaining the attention of other fanciers. By 1985 the breed was breeding true. Over the years, the breed faced various ups and downs in the show world, registration industry, and among breeders.

While the breed is good for guarding, it is also bred to be a more social breed without the tenacity of some other bully breeds.

Today there are several breeders who specialize in this breed, but as of recent more attention has been given to the American Bully – another new developing breed – that has been bred in much the same way but with an expanded stock base of other bully breeds.

What are the Olde English Bulldogge breed standards?

Color:
Brindle, solid colors except for blue, black, or white albinism. The breed may also be piebald within acceptable colors

What does it cost to register my Alano Espanol with the American Bully Association?

What does it cost to register a Alano Espanol litter?

Where can I find a single Alano Espanol registration form for my dog?

Can I register an entire Alano Espanol Family (Mom, Dad and Litter) simultaneously?

How long does the Alano Espanol registration process take?

Where can I acquire a pedigree template for submitting my Alano Espanol known genealogy / pedigree information?